There is always at least one thing everyone should do.

It’s what they’re meant to do, what they’re good at, what feels right, what helps others and can be shared, what makes the doer get in the zone, lose track of time and dedicate himself to it entirely.

This thing will be his salvation, his therapy, both his relaxation and work. It will be his duty because he knows he has to do it, and then he has to involve others.

The world would have been different – in a better way – if everyone followed their path.

I believe everyone has one, or more. The point is that he has to stay mindful and follow it, stay true to what’s important to him and do what he’s supposed to do.

These are all things that make us leave behind what matters.

They turn us into average people, who only care about what others are doing and what others think of them; who often feel sad, depressed and hopeless for many reasons but never important ones; who have jobs they hate, work for and with people they can’t stand so that they can make money that is never enough and can spend it on things that actually make life worse. These people live in their comfort zone, fill their minds with jealousy, judgmental and negative thoughts, fears, worries about the future, regrets, doubts.

They become empty on the inside and sometimes you can see that in their eyes.

The solution to that is to find the path they’ve lost a long time ago.

It’s still there, probably still the same and has the same tremendous benefits to the person who has to walk it once he follows it.

That’s often hard to explain. This path may appear in so many different ways, in different situations, and the meaning we give it can vary. But one thing is sure – once you’re back on it, everything feels just right.

It’s about doing what you’re meant to, finding your thing and dedicating time to it. Making it your mission and staying true to it.

I may do many other things, but nothing can compare to that. Simply because it’s my thing. 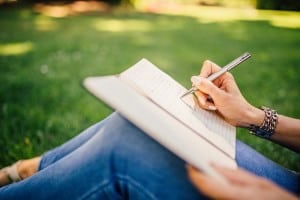 I devoted myself to it only 2-3 years ago. I mean that’s when I really started writing. And everything changed. I feel so much better, happier. I’ve never had something that felt so right before, often in an inexplicable way.

Ever since I can remember, I’ve showed an interest in writing. I loved essays at primary school, I loved books. I was outgoing and have lived enough, although secretly an introvert, but I never stopped reading and being fascinated with how I felt when I write.

As a little kid, I’ve written poems. But many others have too.

Also, at some point in high school I’ve felt so many emotions that instead of bursting into tears I just took sheets and a pen, late at night at home, and started writing. It often last for hours.
And then I felt relieved. That’s when I realized writing was also my therapy.

At school there have been times when I wasn’t prepared at all for an exam. But if it was an essay, or something about a book I should have read but haven’t and an extract of the text was given, I had great marks.
That – and other situations in which I’ve helped others with writing, or things about grammar and literature were just coming to my mind – was when I though I may even be good at that.

I also noticed that every time I wrote for a while, be it at school or for something else, I felt more energetic, happy, enthusiastic. My energy level increased significantly.

But it wasn’t until my first year at university, that I really started writing. It was a bit of a depressed period, not that something has happened, but just that I needed a vent. And I started writing a lot.
I lived alone for a while, and was writing for a few whole days. Then kept doing it during the night – that’s when I’m most productive. And haven’t stopped since then.

I started my blog a few months after that. And have been writing whenever I feel like. I understood that there’s no such thing as writer’s block. Writing, creating, and anything else, is simply a habit. And when practiced by being done repeatedly, it becomes a daily activity.

Related: The Simple Productivity Habits That Help Me Write A Lot Daily

Also, inspiration can be found all the time, anywhere. It’s in the way you think and look at the world. And yes, sometimes I just feel like writing and words come naturally, other times – I don’t. But a writer can write whenever he decides to, and that can be all the time.

I have big plans for that now. I finished my first book, which I will release for pre-orders in a week. The whole writing thing is evolving, but I’m not surprised. I’m grateful and enjoy every second of it. But it doesn’t come as a surprise because it feels so right and I was sure that this was going to happen at some point.

It’s my passion. And it’s the perfect thing for me because it requires me to write about the things I care, share them with like-minded people, write whenever I feel like and not to do what I’m told to or work for someone else and listen to what others think.

Many people may not agree that it’s what I should spend hours each day doing, many won’t like my writing and may find them simple, boring, unworthy or call me illiterate.
It doesn’t even matter that English is just my second language and I may post and publish stuff with mistakes here and there even after a few revisions. Everyone has the right of having an opinion and expressing it.

But as long as I feel great about it, as long as people tell me I inspire them and that my work matters, I’ll keep doing it.

Also, it helps me grow. Sometimes I just leave my mind wonder while writing. It’s a kind of meditation for me – I just go with the flow and let my left hand do the work on the sheet, or my fingers on the keyboard. Other times I don’t even know what I’m going to think about before I have written it. That’s how I come up to new realizations every now and then. And it feels amazing.

The point of this post is to show you how important it is to find that thing, to make it your mission, to master it by practicing it daily, preferably to make it your career, let it make you a better person, and share it with others, help them and make it your contribution to the world and also a legacy.

Related: How to Leave a Legacy

Right now, for example, I’m writing about writing. It’s ridiculous but it’s like a confession. There’s a lot of passion in this post and it may inspire someone out there and make him do something about his life that he has been putting off for ages or haven’t had the motivation to do. Or even if it makes someone smile, touches a heart, or makes someone think, it has done its job.

Everything with a purpose is powerful. Even this text.

So if you have found it, keep investing time in it. If you haven’t – look for it by analyzing the things you’ve always wanted, the things that move you and you care about and search for it deep inside yourself. It’s worth it.

It’s your turn now. From all the things you do, what’s the one that just feels right? And how can you turn it into something more than just a hobby?

I help high vibe people create an abundant, value-driven business so they can live a fearless life and provide epic value.